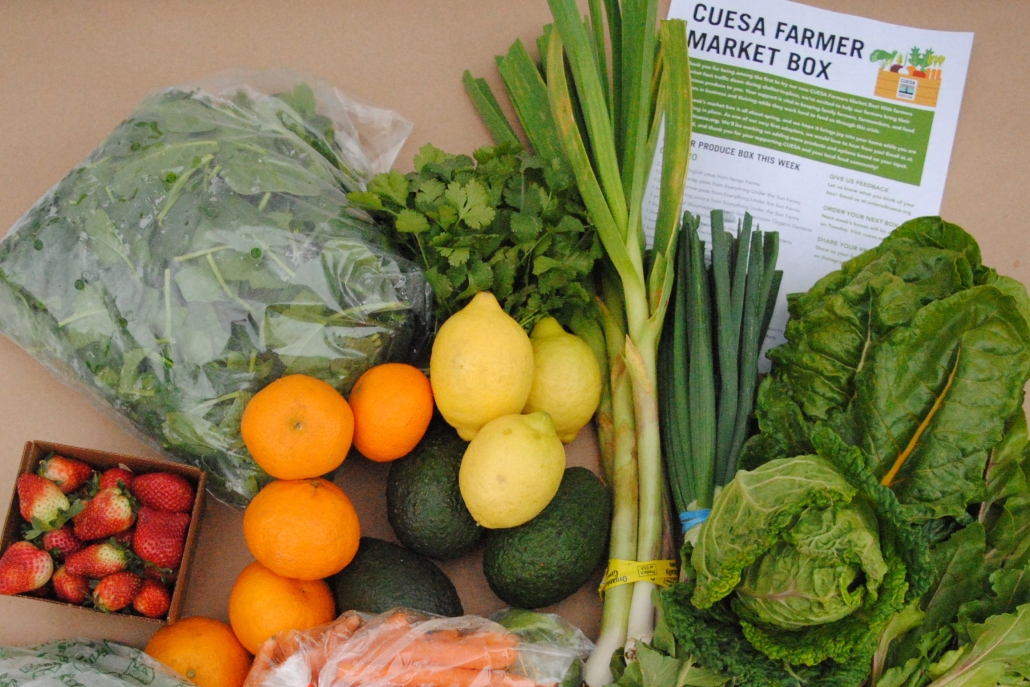 My anxiety level spikes at the thought of going to a grocery store. The lines are long, and once inside, it’s like playing bumper carts with your fellow shoppers all scrambling to keep out of each other’s way. I’m so grateful to the workers who are cashiering and bagging groceries, but I worry about them at the same time.

A great alternative and one I highly recommend is shopping at your local farmer’s market.

You will be outside in fresh air;
You will buy produce harvested the day before;
You will find sustainably raised meat, fish, and eggs and fresh cheese;
You will most likely find freshly baked bread and good coffee;
You will be buying from small farmers and other independent food businesses who need your support.

I guarantee you’ll feel energized and happy after spending an hour or two in a farmer’s market community.

PRECAUTIONS TO KEEP YOU SAFE

Farmers and other vendors are taking precautions to keep you safe by offering bagged fruits and vegetables, selecting items for you, maintaining lines, and encouraging the use of apps, or credit cards instead of cash. Some are offering curbside pickup of pre-packed boxes. The farmers market at the Ferry Plaza farmers market in San Francisco run by CUESA – The Center for Urban Education For Sustainable Agriculture, has curated a “best of the market” box that you can purchase on-line and then drive-by to pick up. I bought it last Saturday, and I’ve been enjoying the bounty all week.

If you live in the San Francisco Bay Area and would like to be notified about the CUESA Farmers Market Box availability sign up here. You can also order from the individual farms that sell at the market here.

I love to read all year round, and there is always a stack of books by my bed. I read a chapter or two every night before I go to sleep. But, for me, lazy summer days are the most conducive to getting some long reading sessions in. My favorite books usually end up being recommendations from friends so I thought I’d tap into the power of Twitter and crowdsource a list of good books to devour during the next few months. The response was as expected. I got an impressive list from fellow passionate readers. Thank you!

“Anyone around this Friday afternoon to recommend some good reads for the summer? I like both fiction and nonfiction, professional development ok too. #bookworm #books #reading”

Below, I’ve listed the books and brief comments that I copied from Goodreads and Amazon reviews, (with a few from the person that made the recommendation). I’ve also included Twitter handles of everyone who chimed in and the authors, so you can follow some fellow bookworms on Twitter if you like.

The History of Soul 2065 by Barbara Krasnoff (@BarbK) recommended by @twcarey, “Amazing mosaic novel. Wow wow wow.” “Powerful and dreamlike, this intergenerational meditation on family, mortality, and hope is far more than the sum of its parts.”

Someone Who Will Love You In All Your Damaged Glory by Raphael Bob-Waksberg (@RaphaelBW) recommended by @twcarey, “Raphael knows love like no one else. And he knows good writing. When you mix those two things, you have a powerful and dangerous combination. Because with some short stories, or even paragraphs, Raphael can make you FEEL things.’

Shoe Dog by Phil Knight (@NikeUnLeash) recommended @calebsilver, “As a sucker for biographies and success stories this will be my all-time favorite for its 360-degree view of the personal and professional life of an entrepreneur.”

Becoming by Michelle Obama (@MichelleObama) recommended by @EllenYChang, “Her spirit is so incredibly deep and strong. The stories from her childhood, her brother, her neighborhood, her family, inform us in a brilliant voice about what it was like in the place and time she grew up.”

Everything That Remains: A Memoir by the Minimalists by Joshua Field Millburn (@JFM) recommended by @abbie_kaiser, “I just finished Everything that Remains by @TheMinimalists and I found it incredibly thought-provoking. Even if Minimalism isn’t on the top of your interests, it’s rich with story and a new perspective on what it means to live a full life.”

The Alice Network by Kate Quinn (@KateQuinnAuthor)  recommended by @LandisWeaver “A great story with true historical events woven throughout along with real people that participated in defeating the enemy. An original novel that brings to light the efforts of brave women during WWI & WWII.”

An Absolutely Remarkable Thing by Hank Green (@hankgreen)  recommended by @Landis Weaver, “This book grabbed my attention and didn’t let go until I finished the whole thing in one day. A meditation on fame and power and humanity wrapped in a thrilling, engrossing shell. Warning: you will want the next one right away. And it does have some strong language, but I didn’t feel it was excessive.”

Normal People by Sally Rooney recommended by @money_matriarch,
“How do two damaged people, who long for nothing more than to be “normal”, navigate the intricacies of a relationship? This book tore my heart out and stomped on it, and I mean that in the best possible way.”

Pachinko by Min Jin Lee (@minjinlee11) recommended by @money_matriarch, “What a marvelous, deeply engrossing novel about four generations of a Korean family in Japan. There was a lot of story here and a lot of history, and it is all rendered in impeccable prose with a touch of steeliness.”

How To Do Nothing by Jenny Odell (@the_jennitaur) recommended by @money_matriarch,
“Excellent and thoughtful book, probably the best I’ve read on the topic of the attention economy precisely because Odell resists facile prescriptions and instead critiques the roots of the problems we are currently facing and which social media is exacerbating.”

The Last Cowboys by John Branch (@JohnBranchNYT)  recommended by @rachel_elson,
“John Branch has captured an incredible tale about an incredible family in Utah. And it is so very well told. Not only do readers learn about what it takes to be a world champion rodeo competitor and the importance of family, but it’s a portrait of southwestern Utah (think Zion National Park) and environs and the challenges to those who live there.”

The Night Circus by Erin Morgenstern (@erinmorgenstern) recommended by @rachel_elson,
One word to describe this: Enchanting! What a beautifully written story, with such vivid imagery that you can practically see the scenes and smell the smells as you’re reading.”

Anything by Attica Locke (@atticalocke) recommended by @rachel_elson. Her first novel is Black Water Rising: A Novel (Jay Porter Series). “She is one of those authors where I will drop everything to read any new work of hers. She’s also one of the crime authors I most recommend.”

Ladder To The Sky by John Boyne (@JohnBoyne) recommended by @naparose,
“A Ladder to the Sky is so hard to describe properly, but it’s so damn good that I’m going to give it a try: a man without scruples (or empathy, or any basic human emotions, really) wants more than anything to be an author. Never mind the fact that he can’t write.”

November Road by Lou Berney (@Lou_Berney) recommended by @RCastanedaUSN,
“A stellar piece of noir speculative historical fiction from Lou Berney, set amidst a background of a nation seeking to redefine itself with its social and political turbulence with the clamor for civil rights, feminism, and a fear of nuclear weapons.”

The Overstory by Richard Powers recommended by @LFCBetsy and @ihearttheroad,
“Wondrous, exhilarating novel about nine strangers brought together by an unfolding natural catastrophe. The best novel ever written about trees, and really, just one of the best novels, period.”

Lawrence in Arabia by Scott Anderson recommended by @AlexSkoirchet,
“It’s a fascinating read that mercilessly describes how a small group of western misfits and a Zionist agronomist shaped the modern Middle East pre and post WWI.”

Rachel Hollis’s books (@msrachelhollis)  recommended by @BionicSocialite, for example,
Girl, Stop Apologizing: A Shame-Free Plan for Embracing and Achieving Your Goals “Rachel Hollis has seen it too often: women not living into their full potential. They feel a tugging on their hearts for something more, but they’re afraid of embarrassment, of falling short of perfection, of not being enough.”