Millions of women all over the world took to the streets on January 21st, 2017 to stand up for what they believe in primarily fueled by the fear that the new Trump administration would threaten hard-won reproductive, civil and human rights.  The energy of the Women’s March was contagious, and I was thrilled to be a part of the sea of knitted pink hats and hand-made signs in San Francisco with clever slogans such as “Tweet women with respect”, “Without Hermione, Harry Potter would have died in book 1”, “I’m a girl, what’s your superpower?

Women marched again a year later in January of 2018, but this time the marches were fueled by the anti-sexual assault and women’s empowerment movements #MeToo and Time’s Up. These movements have elevated the global consciousness surrounding the obstacles women face in their lives, both personal and professional. Women desperately want to be empowered not diminished in the workplace and in their own lives.

Taking responsibility and control of your money is one big step to feeling empowered.

The definition of empowerment is compelling: the process of becoming stronger and more confident, especially in controlling one’s life and claiming one’s rights. As a financial advisor who works with many women, my greatest satisfaction is watching a client go from feeling anxious and confused about her finances to clear and confident about her future. Taking responsibility and control of your money is one big step to feeling empowered.

The people who marched in 2017 and 2018 were diverse – a family affair for many, with multi-generational mothers, daughters, and grandmothers channeling determination and commitment, supportive husbands and male friends in tow.  I tell my clients that financial empowerment is attainable at any age, especially with that same commitment and determination to become financially literate, independent, and secure.

Take control of your financial future

Recently I met with a young woman in her early 20’s who wanted to get her finances on track. She started working full-time a couple of years ago and was making enough money to know she needed to get educated and set up a savings plan.

We sat down for an hour and a half and quickly decided the first steps: increase her student loan payments, open a Roth account, and boost her contribution to her 401 (k) plan.  After she fully funded her emergency savings account, she planned to begin saving in a taxable account toward future goals, such as buying a home.

A few days later, she sent me an email and told me that she had completed the to-do list we put together before she left my office. This young woman is empowered, and her financial future is assuredly going to be bright.

As Martin Luther King, Jr. said: “Faith is taking the first step even when you don’t see the whole staircase.”

Do you want to manage your money (and life!) better? 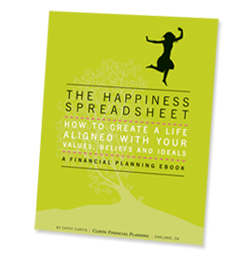 If you want to think differently about the relationship between your spending, your values and your happiness, then sign up to get your FREE copy of The Happiness Spreadsheet.

If you found this blog post useful or inspirational, please share it on your favorite social media network!

Putting Women At The Center Of The Story

Walking Away from a Mortgage - Is It a Viable Option?

Simple Truth #1: Procrastination is the Cause of Financial Fuzziness

Simple Money Truth # 7: You Are Your Credit Score

Cathy Curtis is a fee only Certified Financial Planner (CFP) and investment advisor who specializes in the finances of smart, independent women.
Learn More…

Stay up-to-date with the latest information.

SCHEDULE
25 Tips to Get Your Clothes Shopping Habit Under Control

The Truth About Diversification
Scroll to top Do NOT follow this link or you will be banned from the site!